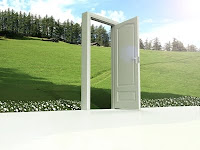 It happened three weeks ago. I was startled awake by the click of the front door closing. Looking back, I am astonished that a sound so slight and innocuous would awaken me from a sound sleep.

What we both heard next were very light footsteps on the front porch.

I lay restless for ten minutes, straining my ears, lifting my head at every sound. I was uneasy, itchy, anxious.

Finally, I got out of bed and headed directly to my mother’s room with no real, conscious intention of doing so. Her bed was empty.

“Dan, my mother isn’t up here!” I said, as I flew down the stairs and called for her in increasing decibels. Nothing.

Our house sits on a small dead-end road that intersects with a much larger street. I threw on my slippers and raced to the end of it. At 5:00a, the sky was as dark as night. The streetlights illuminated the intersecting road in florescent shadows. My head snapped right and left. No mother.

Back at the house I did a much more thorough search while Dan was getting dressed. I saw that my mother’s pocketbook was gone. One of her pouty-lipped Styrofoam busts was devoid of its wig.

“Did you check the basement bathroom?” Dan said.

Nothing. No mother. And no feelings. I was empty of emotion. My heart was banging, but for all intents and purposes I was lifeless. My mind was racing but my blood ran still.

I found her at 5:25a as she was just stepping onto someone’s porch, her hand reaching for the doorbell.

She turned as if in slow motion.

I jogged up to her and put my arm around her shoulders. She was clothed in her navy blue Capri’s with embroidered strawberries, a pale green top and a black jacket. She had put sneakers on, her wig, rouge and a deep red lipstick. She was carrying her purse and she was drenched in sweat.

“To see Ann Becky in the hospital.”

My mother cared for Ann everyday after school for years while Ann’s mother, a single parent, worked. Ma would often take her for weekends as well. Ann was part of our family for a long time and something in my mother’s ailing mind was seeking her out.

“Isn’t it too early to visit her?” I asked, playing along so as not to frighten her.

“No, it’s the perfect time. No one will be there.” She was breathing heavily and her eyes were foggy. But every motion she made was sharp and jagged, defined like a short-circuiting robot.

“Can we go back to the house and have coffee first?” I asked. “Then we can get going to the hospital.”

Once we were back inside, my mother started to “come to.” The cloudiness lifted, replaced by a sharp confusion. In her land of patient visiting, she knew exactly where she was going. Now, back at my house, reality was nudging its way in and the scenarios didn’t match up.

I got her settled in bed and walked dazedly back to my own bedroom. Dan was waiting for me.

“There is nothing to feel,” he said. “She is safe and that’s all that matters.”

But I felt it seven hours later.

I had finished my last job and was sitting in my car. Here it comes, I thought, as the wave of fear and grief washed away the shock, and exposed the naked feelings my mind was hiding from my heart.

I didn’t expect this. I thought ‘wandering’ would ignore my mother. I don’t know why. Perhaps because once that happens, there is no denying the disease. It is too grave and blatant a symptom.

Since that morning three weeks ago, my mother has attempted to leave the house one other time. She has a reindeer bell on her door to alert us if she leaves her room and we now turn on our alarm system as an added precaution. I’ll order an ID bracelet and have even considered making up a one sheet handout with my mother’s picture on it and stats to distribute throughout our neighborhood. Her doctor has increased her Seroquel at night to make the possibility of an early morning stroll less likely.

As for me, that day put me in a whole other realm of anxiety and depression and I still haven’t found my way out.
Posted by Lisa at 6:29 AM