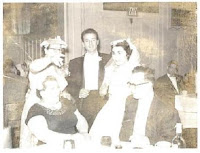 My mother has been asking for my father almost four times a week now.

“Wow.” Thoughtful silence. “Are you sure?”

“Cause he would look for us, right? If he were alive?”

I’ve been told that a person with dementia can no longer live in our world, so we must crawl into theirs. Our/their reality is unfathomable to them. Parts of their brain are being taken over, and what is real is being replaced by what is not, or with what was before.

For example, my mother, though she lives with me and my husband, has no idea that she does. She believes that she maintains a separate residence “somewhere else.” Most nights, she’ll ask “when are you taking me home?” or “Am I sleeping here tonight?”

I used to try to convince her by saying, “Ma, go look upstairs! All your clothes are here. Why would they be here if you don’t live here?” Sometimes I’d be so adamant as to march her to the closet to view her things. This accomplished nothing but making her more confused and frightened. The current reality, in her diseased mind, does not include her living with me.

So now, I crawl into her world and say “Why don’t you stay here tonight Ma? We’d love you to stay.” And she’ll say ok and the moment passes easier for her.

But how do I do that in this case with my father? What can I possibly say to assuage her angst? That daddy is alive but away on a trip? That he’s still in the Navy fighting on the USS Half Moon? I don’t think so. Not now anyway. Not until things get much worse and not having him alive is worse than understanding he is gone. There will come a time when there will be no understanding, and I’ll have to find the right words or fantasy to set her at peace. I have no idea what those words will be.
Posted by Lisa at 12:35 PM