Sewing in the Morning 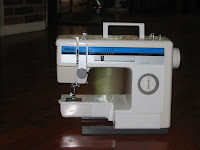 This morning was a particularly interesting one - a demonstration of how sadness can be tied up in comedy. We have a lot of those moments. Stops and starts, learning as we go, flying by the seat of our pants, running behind the runaway train. We can laugh at our mistakes and how we flounder (as long as my mother isn't hurt by our ignorance) while still feeling the sadness of her disease.

When Ma woke up this morning, she was clearly in a state. She leapt out of bed in her red polka-dot nightgown and bright white ankle socks, stuffed her bra in her pocketbook and said "where's the sewing machine."

Now, I know the first thing I must do is try to re-direct her attention onto a different thought or task. It is the easiest way to get her back on track causing the least amount of stress for her.

"I'm not sure," I said. "How about getting in the shower?" Shower, what an idiot. She hates the shower.

She gives me a tight-lipped look, eyes glowing. ""The sewing machine was just here. Where is it?"

"Let's worry about the sewing machine when we get home this afternoon, ok?"

Big frustrated sigh and the hand wave she does so well, a complete dismissal in that one simple gesture. I have to get it on tape. It's classic.

She starts to search the three rooms upstairs. "Where IS it." she demands. "I have to finish."

Knowing redirection isn't working at this point, I start in with the lies.

Her tiny feet in her little white socks start down the stairs. Her bald head descending from my view.

I whisper to him, "redirect or play along!"

"I hear you Lisa!" I swear she has the hearing of a 20 year old when it comes to whispers but can't hear the TV five feet in front of her.

So I say louder, "the sewing machine that broke the needle, Dan. The one you have in the garage to fix." Why am I getting into broken needles and locations? Keep the lies simple!

He takes her out to the garage and points to our old white machine.

"That's not the one," she says in a huff and turns around. "Forget about it, alright? You people..." There she goes with the you people again.

She pads into the kitchen and heads right for the cookies.

"How about a nice cup of coffee Jill?"

"Yeah, alright." She says, not meeting his eyes.