Through the Eyes of Friends 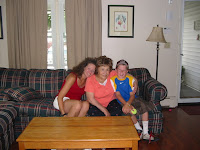 I often feel as if my mother, Dan and I are in a bubble; a trilogy of seclusion in a world of strangeness. But lately, I’ve had the chance to see my mother through the eyes of those who knew her before dementia started robbing her of herself.

My best and oldest friend of twenty-eight years, also named Lisa, has loved my mother with an honesty and freeness one can have with someone who is like a mother, but isn’t. There was a time when they spent entire weeks together. Lisa knew my mother’s affect prior to dementia as much as any daughter would.

Lisa gave me her impressions through an aching heart when we visited her:

“When she saw me in the past, she'd say ‘LEE!’ with authentic excitement and happiness. Now it’s simply ‘hi lee,’- not unhappy but subdued. When she asked me questions she clearly should have known the answers to, that was the very first hit for me of, ‘Wow she has this terrible disease,’ and my heart dropped into my stomach.

I heard an unexplainable emptiness in her words and saw the same in her eyes. She was there physically but she was a shell of what she used to be. I just keep saying in my mind over and over, ‘Give me back my Jilly Girl,’and I felt sick knowing this is just the beginning.”

My dear friend Tami came to visit this weekend with her nine year old son. The picture is one I snapped while they were together. Tami said:

“The whole time we were together Gilda and I chatted just like we always have. Well that isn't true - almost like we did. It was like talking to someone through a screen door - not like glass where you can't hear someone or physically touch them. Our hearing was fine and we touched through the screen but not completely. We still had warmth and a connection, but something was lost among the tiny places where the screen was between us. I suppose the screen will be replaced with glass one day but I will be there, looking in, even if Gilda doesn't remember tomorrow.”

Hearing outside impressions of who my mother has become broke my heart in yet another place, but also offered a bizarre salve of understanding - “Now they know. Now they truly understand.” Daily phone calls of explanation just don’t cut to the brutal reality of the disease. Hearing the confusion and pain in my voice does not come close to a personal whisper of dementia fresh on your skin.
Posted by Lisa at 11:22 AM