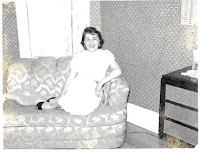 Mom was in the North End of Boston circa 1960 yesterday. I got a call from the rest home at 3:30p, my blood flowing faster when I saw the number come up on caller-ID. The Director of Nurses, we’ll call her Karen, asked if I had a minute to speak with my mother.

“Lisa, who’s picking Jimmy up from school?” Ma asked anxiously. My brother, Jim, is fifty-two now, but in her mind, he was eight years old.

I thought fast. “Josie is picking him up.”

Josie was like a grandmother to us growing up and at our house everyday. But Mom didn’t sound convinced. I asked Karen if I should visit right away but she said later was fine, Ma just needed redirecting.

When I got to the rest home two hours later, Ma was still in a state. The staff was completely focused on her. At least six people, all concerned but calm, followed me into the den where Ma was.

“Lisa! There you are!” Ma exclaimed. "Who’s picking Jimmy up from school?”

“But does Josie have a key to the house?”

“Jim is gonna stay with her at her house. He is sleeping over there.” (There I went, getting too complicated).

“Oh,” a thoughtful pause. “Will she let him watch TV?”

I continued to assure her her son was fine and once she became semi-convinced, I tried to distract her with an outing...supper and a visit to a pet-sitting client. She had her favorite hamburger and fries and then we called my brother.

“Hi Jim!” I said to him, sunshine in my voice. “Ma wants to be sure you got picked up from school and I told her you were safe with Josie and sleeping over there.” He caught on immediately.

I could hear him telling our mother that Josie had cooked macaroni and meatballs for him and that she was in fact allowing him to watch TV. My mother had a contented smile on her face when the conversation ended and my stomach flew to my throat. I wanted to vomit on the spot from heartbreak.

“So that phone has the 2378 number on it?” North End, Boston - my childhood home on Jackson Avenue.

“Yup. And we can talk to Jim anytime right from it.”

Ma was finally completely relaxed by the time we returned to the rest home a couple of hours later. She got her meds, we picked out a nightgown, and I tucked her in with a kiss to her fuzzy head.