Walking into the Next Stage Together 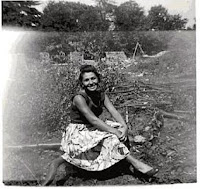 My mother and I crossed paths in the hallway last night, just before bed. Though we were mere inches from each other, she didn’t notice I was there. Or, more accurately, it seemed as if she herself was someplace else.

Two things immediately struck me as odd and sent an alert tramping up my spine.

1) Whenever she speaks of my father, it is always as her husband. She has never regressed to their relationship pre-marriage when he lived in East Boston.

2) Though my mother can curse better than a foot soldier in the Army, I’ve never ever heard her use the “f” word in this way. As an adjective? Absolutely. But as a verb? Only in the deep heat of an argument and even then, sparingly. Sure, she’ll say it often in Italian. But all curse words lose weight to those of us who aren’t native to the language.

Though I know it is better not to draw attention to the memory loss (or memory shift in this case), I was unable to keep silent. I was frightened for her; the absent look, the change in speech. If these were signs of her entering the next stage of dementia, I was going in with her.

She turned and gazed at me through muddy eyes; half seeing, half mired in the muck.

“He’s been dead for thirty-three years.”

“Oh,” she looked down at the floor. “Who’s my boyfriend then?”

“Do you mean Norman?”

“No…forget about it.” She was not only confused but also seemed embarrassed.

I waited a few beats and then went into her room. She was already under the covers, only her naked head peeking out. I eased myself down beside her and spooned her close.

“I didn’t understand. I was confused. I really thought…”

I stayed only a minute longer. She can sometimes get annoyed with physical affection, and I didn’t want to add another stressor to the night.

The progression of these symptoms leads me to believe my mother is now somewhere between Stages 5 and 6 of Alzheimer’s.* We are seeing her doctor on Thursday and I’ll ask for a professional verdict then.

In the meantime, I must find a way to accept new manifestations of this illness when and how they present themselves. This is not a disease that gets better. There is currently no cure, and drugs only work to slow the process or treat the symptoms (minimally on both counts).** The disease never goes into remission, and there are no Alzheimer survivors.