The Case of the Flying Trousers 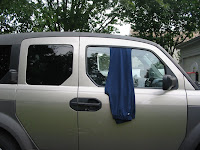 Not having children ill prepared me for my mother's care. I can cite numerous examples of this, but there will never be a more perfect illustration (I hope) than during a trip we took this past Sunday.

My mother, Dan and I planned to rendezvous with my mother’s youngest sister, Sylvia, in Connecticut. I warned my aunt that she shouldn’t plan for us to stay long; Ma is at the mercy of her disease and when the dementia drum beats, we march.

Having set my Aunt’s expectations, I packed a bit of food, music that we three like and…one adult diaper. I figured since my mother uses just one at daycare, we’d only need one for our trip.

We had just crossed the Connecticut border when my mother’s voice peeped from the back. “I think I just went to the bathroom.” Slight pause. “Oh God, I did.”

About three seconds later, the odor wafted stealthily to the front seats.

“I still have to go…can we stop somewhere?”

Dan suggested we take the next exit; he knew of a Dunkin Donuts directly off it. However, the one to which he was referring turned out to be ten minutes away and back in Massachusetts. By that time, she had let loose whatever was remaining.

We eventually wound up at a gas station. I gingerly took off my mother’s pants, hoping to keep them as victimless as possible. But, alas, the loose stool had overtaken the diaper, seeped through the top edge, and sullied the upper part of my mother’s trousers.

“I have to wash them in the sink.”

“But I don’t have any other pants.”

Yup, I know...and only one diaper.

Her nylon stockings were also saturated. I tossed those into the trash.

And then began the cleanup.

The cardboard box colored, industrial paper towels, standard to almost every rest stop bathroom, are not conducive to a quick and thorough loose stool cleanup. I tried using them wet, wet with soap, dry (“Lisa, that hurts!”) and back again for another full cycle. We were easily fifteen minutes in before she was un-pooped and presentable.

“OK, Ma…I know these pants are wet, but you have to put them on just ‘til we get to the car. Then you can take them off and we’ll figure out a way to dry them.”

Her skinny legs slipped into the last remaining diaper, and then into the wet and cold pants. Her naked feet went directly into her sneakers. I cleaned up the bathroom and informed the attendant that she may want to change the trash bag. To say the bathroom was evil-smelling was an understatement of the grandest proportion.

“Can we buy something to stop the diarrhea?”

Another item I should have packed.

Dan went back into the rest stop as I disrobed my mother again. We loaded her up on Imodium and draped a fleece jacket over her legs. Then, the idea struck; we’ll tie the bottom of her pants to the handle bar toward the inside roof of the car, fling the wet part out the window, and close it tight, thus trapping the pants half in/half out of the car. This provided a 70 mph, forty-five minute fly dry cycle.

When she saw her trousers flapping in the wind, she started to wail, “My pants! What are you doing with my pants? They are going to fall out!”

“But now they’re gonna be all wrinkled. I want my pants in here now!”

“Settle down Ma!” I said. “They have to dry and this is the only way.”

When the day was done and we arrived back home, I told the hapless tale to my best friend Lisa. She was flabbergasted.

“You didn’t have a change of clothes? Wipes? And you brought just ONE diaper?”

“How was I supposed to know?”

She gave me a semi-accusatory sigh, “OK, listen, I’ll make you a list…”

She has a six year old son so she knows. I never had children so I didn’t…until now.
Posted by Lisa at 6:27 AM